We have certainly faced some challenges over the past several months, haven’t we? I mean, WTH? They’re not particularly fun to live through, are they? In the overall, big scheme of things, if we take a step back, this is certainly a time that will go down in history.  That part is pretty cool.  We are all a part of history right now.  When we’re dead and gone, generations will look back and talk about how we overcame and became better as a society.  That’s what we want, isn’t it?  At least, I do.  There has been suffering, either due to COVID or race relations.  I don’t like that.  I don’t want that.  It sickens me to know that anyone suffers.  Have you ever suffered? It sucks.  We do have to suffer, unfortunately.  For myself, if I didn’t hurt or feel pain, I wouldn’t be able to be empathetic to others.  If you have a heart at all, even in the midst of your darkest days, you pray that others don’t have to hurt.  I have had days where I would like to hide in a hole or eat a whole gallon of ice cream.  As bad as it feels, as I may be crying to a friend on the phone, I say “I don’t wish this pain on my worst enemy.” And I mean it.  Thank God! The last thing anyone else needs in their life is pain and bitterness. Ugh.

What can we do about it?

Let’s just love one another.  Every day.  Do your part in showing compassion and respect to others. We are all human and we all want to feel included, cared for, appreciated, valued…It’s my belief that what goes around, comes around.  “Smiles are contagious.” Stay positive. It’s unrealistic for each person to always be positive.  So, don’t beat yourself up if you’re not.  We’re humans full of a gamut of emotions.  You’re not a bad person if you get down sometimes and aren’t particularly optimistic.  I’ve been around long enough to know that emotions come and go (it’s a life-long, cyclical, frustrating battle).  However, “This too shall pass.” Feed yourself positive thoughts, read something inspiring, or maybe turn on a sad movie and bawl your eyes out.  Then, move on.  Just don’t stop loving and caring about others.  Your small acts of kindness each day towards others can go a long way.  Others will witness it and do the same.

I wanted to share the words I read recently of an aviatrix.   She has written about adversity in aviation.  It is a reminder of battles that have been fought in the past and the progress that has been made.  Even in the midst of hardship and challenges. This will hopefully encourage you to believe that there is always an opportunity for positive outcomes.

My blogs have been on hold during the past few months due to a variety of reasons, but there are exciting things coming.  I look forward to sharing my VERY personal journey with you.  There have been many people that have helped guide me and several tools that have helped get me where I am today.  I want to share these things with you because they have helped me discover what I’m here on this planet to do.  Everyone is here on this planet with something to offer!  We all want to know what our purpose is so that we can live a life of contentment.  Stay tuned! 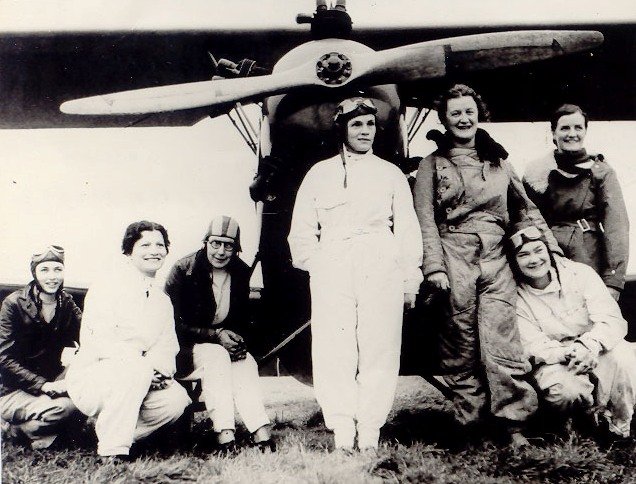 Aviation Challenges of the Past: You Gotta Love ‘Em, Right? Hmmm.

(The following words are of Eleanor Brunsman;  Dated March 28, 2020 (which happens to be my birthday).?

Recent times have been hard on all of us, but it might be good to take a moment to remember how and why we got here in the first place. This is another obstacle that this community will overcome. Especially as women pilots, we know life isn’t easy; many of us even chose this industry not because it was easy, but because it was hard, because we wanted to show that we, as women, could do it too. We walked in, knowing that we were the 7%, and we kept going anyways. Despite our numbers, we’ve stuck together through the ups and downs of this industry. Before this scare, the industry was doing pretty well. Is the greatest strength not found in the face of adversity, though? We are united here because of the challenges we have to face in everyday life. The world threw another challenge at us and we should come out stronger on the other side. If we are going to get through this, we have to get through this together. Most everyone is scared right now for one reason or the other. It seems many of the most respectable people had to conquer hardship to get where they are; how lucky we are to have [many women pilot role models just one email away, today].

This idea of overcoming obstacles is prevalent all throughout the history of aviation. The Wright Brothers did hundreds of test flights before they got close to an airplane; they had to fail again and again to create their own success story. Louis Blériot designed notoriously weak airplanes, which were even banned by the British government at one point. When he crossed the English Channel, his plane repeatedly pitched down, but he dealt with it and made it across, setting a world distance record. Glenn Curtiss found himself in a highly publicized lawsuit with the Wright brothers. He was pushed out of management in the aviation company he had been working with for years in favor of someone who would support a more mass production version of airplane production. Igor Sikorsky fled from Russia amidst the Russian Revolution; he quickly faced a major shortage in finances in America, but with the help of a friend, overcame them. Hugo Junkers lived in Germany in WWI, which was already challenging as it was; the Nazis demanded that Junkers assist them, but he refused so they tried to take his patents and market shares under the threat of imprisonment for high treason; he died protecting his property. Amelia Earhart was a woman in a man’s industry, which came with all kinds of disrespect and judgement; she is known for her courage and determination, not because she had it easy. Charles Lindbergh went about 55 hours without sleep before the 33.5 hour transatlantic flight; he was so exhausted during the flight that he began to hallucinate. Sir Frank Whittle was extremely low on funds when building the jet engine; he only had enough to produce one prototype. Tex Johnston’s good friend died right before the National Air Races, which he participated in and won anyways. It’s interesting how much we focus on their accomplishments and fail to hear about the challenges they faced. They conquered them and became some of the most well-known people in the aviation industry today. If we play our cards right, we might find ourselves among them.

Thank you to Eleanor Brunsman for this lovely, insightful reminder!