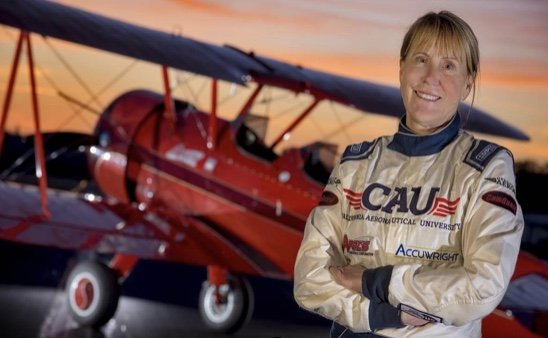 Harnessing the power of education to revolutionize the aviation industry, Vicky Benzing invites young women to challenge themselves with every opportunity that presents itself.

As the L-139 jet passed the home pylon and her crew relayed her results from her qualifying lap, the woman inside proudly smiled, knowing that she shattered the record for the fastest female racer at the National Championship Air Races in Nevada. Her record speed was an exhilarating 469.8 mph! The champ inside of the plane was Vicky Benzing. This is only one of Benzing?s impressive achievements that have inspired more women to be involved in the aviation industry.?

Benzing grew up in California, surrounded by the influences of science and math. As an electrical engineer and someone who could fix anything, her father showed her how to work on cars and engines. He was unquestionably instrumental in her career as an aviator, but it was actually her uncle who was an airshow and air race pilot that sparked her interest in flying. When Benzing was only five years old, she took to the skies with her uncle for her first flight. From that moment on, she began a lifelong love affair with aviation.?

Benzing certainly had a passion for aviation, but she was also attracted to physical chemistry. She earned her doctorate degree from UC Berkeley and found herself immersed in the hotbed of the tech world, working in Silicon Valley. ?She was very successful in her tech career, ultimately becoming a vice president in a $1.5B tech company.?

However, Benzing still longed for the sky and she felt that her time for aviation was compromised by her demanding position in the high tech world. She spent more time traveling than she did at home, working with customers all over the world. She had to seize the opportunity to fly before it slipped away. After dabbling in aviation during her graduate years through skydiving adventures, aerobatic lessons, and the purchase of her first plane, a Luscombe, Benzing decided to pursue this passion more deeply.

During her working years Benzing earned her commercial and ATP licenses and obtained ratings in helicopters and seaplanes. She logged countless hours in the sky and even had the opportunity to literally fly herself all over the world as a co-captain on a company-owned Astra Jet.?

Finally she decided to take the leap and leave her job in high tech to pursue her passion for aviation.? She focused on developing her aerobatic skills in an Extra 300 that she purchased after taking an aerobatic flight with former airshow pilot and coach/mentor to the stars, Wayne Handley. She started by competing in local and regional aerobatic contests.? As she moved up through the various categories she began to fly airshows.? Benzing tells the story of the first airshow that she flew which was for a winery in the Salinas Valley ? she was paid with a case of wine.

But more than any earnings she might make, Benzing was drawn to airshows by the connections she could make with her audience, especially with aspiring female pilots. ?Today, Benzing focuses her airshow energies on flying a 1940 Boeing Stearman that was used to train cadets during WW2. This beautiful piece of flying history has allowed her to interact with the audience at airshows on a very personal level. As the engine roars to life in her Stearman, young girls begin to imagine themselves in the plane, hoping to one day be a pilot.

At this point in her career, Benzing has been flying for over thirty years, has made an appearance in the movie, Mercury 13, participates in about sixteen airshows per year, and flies hundreds of hours. While her accomplishments are greatly notable, what is truly astounding is her impact.?

Benzing has partnered with the California Aeronautical University to help students realize their potential as professionals in the aviation industry. She has inspired women to be bold and adventurous, always staying open to the possibilities of opportunity. Once one opportunity comes along, it leads to many more. She encourages all women to try something new and be challenged. Life is not about knowing how to get somewhere, rather it is about being open to discovery. Benzing has helped create a new generation of bold flyGIRLs who are ready to change the world of aviation through the power of education.? Eager for more on Vicky Benzing??

Check out this link: