Flying to Miami! Part One

Flying to Miami and venturing over the Florida Keys in my little plane has been on my bucket list for a couple of years and the time had finally come to do it!?

Any excuse to visit Florida is always good for me.? I was born in Florida and absolutely love the constant sunshine, sea breezes and warmth the Sunshine State always brings.? There?s an instant ?lift? in my spirit when crossing that state line. The Commemorative Air Force had an event there during an air show and I volunteered almost immediately.? The air show was to take place on Miami Beach.? What could be better than combining the beach and airplanes??? I can?t think of anything.? Picture this: a cocktail in hand, lying on the beach, toes in the sand, cool shades on, watching some of the most amazing aircraft perform maneuvers at top speeds overhead.? It?s a dream come true, right?!?

I have some old friends and new friends living in Florida. My son and his girlfriend were going to come to spend some time with me there too (this would be my chance to pry into their lives and relationship with the least amount of resistance).? My flight route and stops were all perfectly planned.? The weather was going to be pretty cooperative (shockingly!).? Of course, knowing the Florida weather, afternoon pop-up thunderstorms were likely.? My plan was to fly all the way to Miami in one day.? Whew.? It was a loooonnngggggg day!! ?

Let?s Get This Party Started!

My departure time was set for just before sunrise.? I wanted to get to Miami in plenty of time before dark.? Getting past the hottest part of the day and avoiding the worst weather potential was also heavy on my mind.? Admittedly, getting up super early is not something that normally thrills me, but being in the air during sunrise is pretty amazing.? I was looking forward to that.? It doesn?t really matter if I want to get up early or not on these long flight days because I?m usually pretty worked up and don?t sleep that well anyway.? After lying in bed for about an hour, going over and over the flight in my head, thinking through every scenario that could occur during the course of the day, I finally just got myself out of bed and worked out. It was 3:30 a.m.? I was so jacked about this trip!? My brain was saying ?let?s just get it started already!!? ? Getting a work out in before a flight calms me down a bit by relieving me of some nervous energy. It?s also one less thing to think about after my arrival.? Exhaustion will keep me from exercising at the end of the day and I would be sitting ALL freakin? day! The flight, with fuel stops, would take around eight hours.? Plus, after working out, I wouldn?t feel as guilty about eating candy on my flight.? Hahahahaha!? Let?s be honest, there?s a huge portion of guilt that gets me on that treadmill every day! 🙂

I arrived at the airport so early that the gate was closed.? Oops. I forgot about that little detail.? Thankfully, the gate code was retrieved within a few minutes by scrolling (and scrolling and scrolling) through an old text conversation with an instructor.? I?m not sure what my alternatives would?ve been if that had been impossible to locate.? In the back of my mind, I was prepared to risk arrest, by throwing my luggage over the gate and climbing the fence.? By God, I was going to be in the air to see the sunrise!!!?

Everything went pretty smoothly after being granted access by the gate code Gods.? My plane was preflighted, luggage loaded, (and snacks), flight plan filed and me and my little plane were off on our adventure!? The sunrise was gorgeous as we were flying over the Great Smoky Mountains.? My camera was in my lap and the memory card was subsequently loaded with beautiful pictures during those idyllic moments.? And then?

The clouds were skimming the tops of the mountains.? It was IFR.? We were cruising peacefully above the clouds.? My MFD (multi-function display) decided to malfunction.? The pages wouldn?t scroll.? Grrr.? The MFD is used to see and check the engine operations, temperatures, fuel levels, etc.? It also has XM weather radar and airport charts, among a few other things.? I?m usually toggling between the weather page and the engine page but it wouldn?t move beyond the chart page.? I didn?t care a thing about the chart page.? It meant nothing to me at that point.? So, I pulled the MFD circuit breaker and during this time my PFD (primary flight display) threw a couple of red Xs sporadically on my screen.? Geez.? I?m sweating pretty good right about now.? Why now?!? I?m going to die on my way TO Florida.? Could I please die on my way home, AFTER this fabulous trip?? Come on.?

OK.? Remaining calm?. Air traffic control and I were conversing about the situation and they were as helpful as they could be, searching for nearby airports.? After resetting the circuit, the PFD was working perfectly and the MFD came back on.? However, it was now claiming IN BRIGHT RED that we now had less than twelve minutes of fuel remaining.? What? That can?t be right.? We?ve been flying for less than two hours and it was topped off.? I saw it with my own eyes!? My options were to keep flying to get over the mountains, relying on what my eyes had told me or to land and just recheck it for Pete?s sake! That?s what I did.? Of course, the fuel was right where expected.? For peace of mind, it was better to stop and be sure. ?

After taking a break at the airport and doing about a hundred jumping jacks to relieve myself of that fun little tension trip, we hit the blue sky again.? My next stop would be a lunch break just south of Jacksonville.? It was here that I signed my first autograph. ? After landing at 28J (Palatka Municipal Airport), the humidity and heat about knocked me over.? We were definitely in Florida now!!? This was a great airport where I self-served myself some fuel (I?m getting good at that) and met my biggest fan: an enthusiastic, tiny little mutt pooch that could jump probably six feet in the air.? Nonstop.? My rear end was practically numb at this point so I paced back and forth on their porch and ran circles around my little plane.? And then, it was time to open my lunch box and eat.? My lunch usually consists of healthy meals (again, so I can justify eating candy in the plane).? This time it was fresh, raw mushrooms, grape tomatoes, two slices of turkey and a clementine.? That was all gone in about 45 seconds.? The little dog didn?t even beg for any food.? He could see that I was famished.? He watched me intently with a concerned look on his little black and brown face. ?

We went inside where we were greeted by a very large stuffed alligator.? They had some soft drinks and a few magazines. What do my eyes behold?!?? One of the AviNation magazines with the flyGIRL story was right there on top of the stack!? I looked at the manager, he looked at me and I said?? you know I?m in this magazine? and we broke out laughing.? He asked for my autograph and we took a picture.? The picture is pretty horrible because I?m a sweaty mess.? He didn?t care and I really didn?t either.? It was a fun and cool experience.? It gave me the opportunity to share details about myself and flyGIRL with him and the others around.? They said some of the nicest things about women in aviation and told me about some of the female pilots they knew.? Maybe that was exactly what I needed at that time to provide an extra boost and allow me to continue on this Miami, Florida journey!? 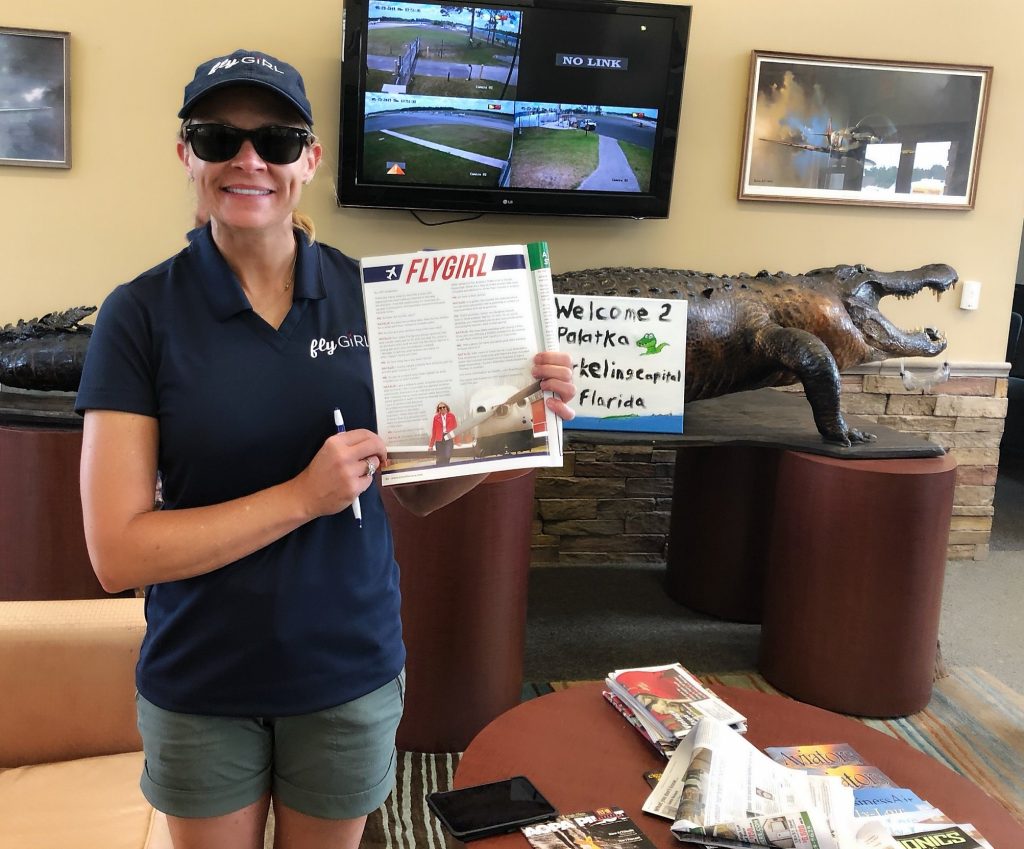 The next portion of this flight would put me in several uncomfortable situations.? Can you say ?real-life learning environment??? Miami is a big city with lots of airplane traffic and fast-talking air traffic controllers?.