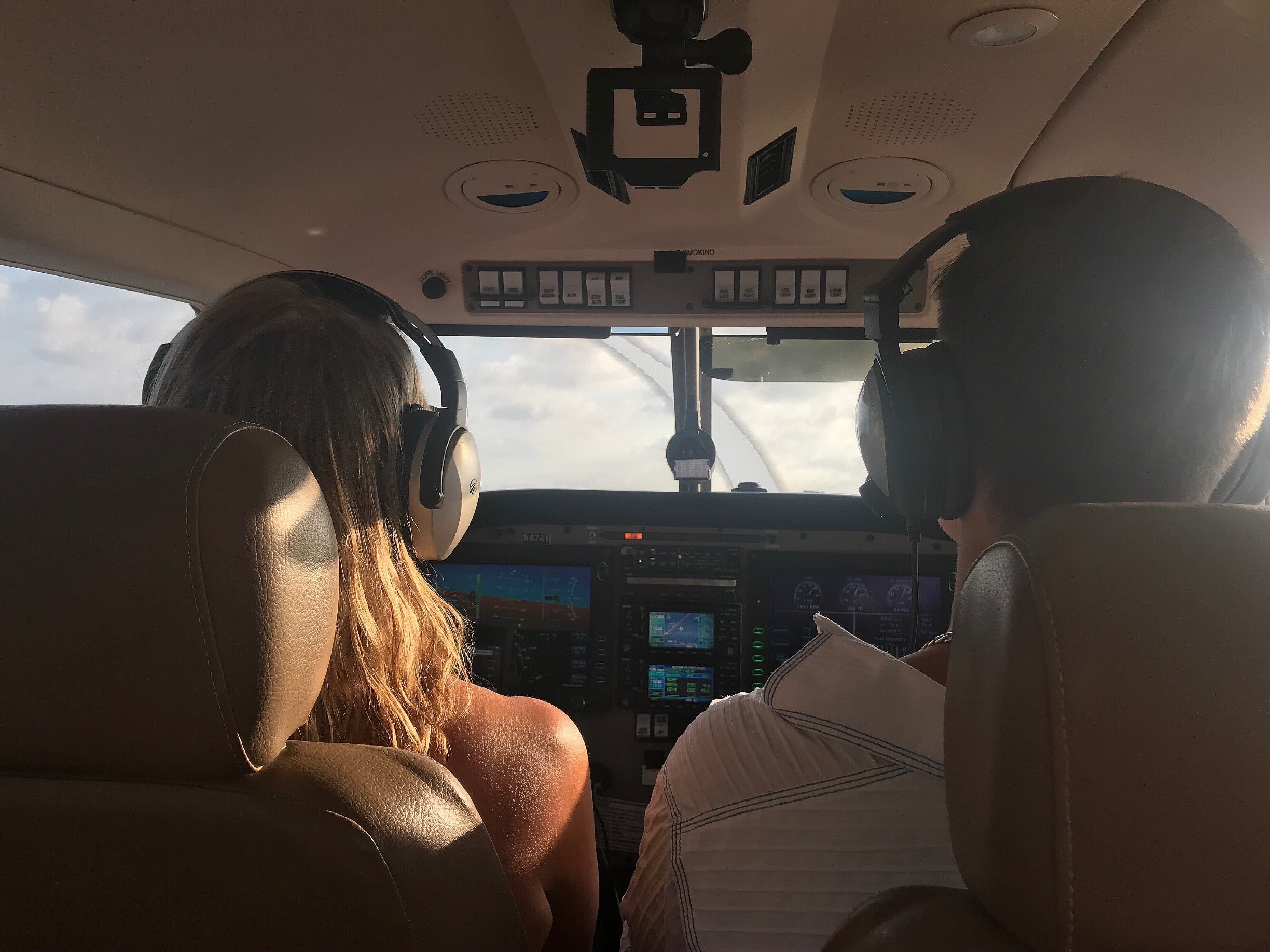 My experience flying IFR for any amount of time longer than two hours is limited.? My journey from Cincinnati to Miami (which you can read more about in last weeks blog, Part One) was mostly VFR. ? So far, the flight had made it over the Smokies and into Florida.? The next leg (and last leg) would be taking me into Miami.? This city is just a tad bit larger than Cincinnati, or Nashville, or anywhere else traveled in my plane thus far!? We weren?t going to be landing at Miami International but the airport of intended landing was just under their airspace, KOPF (Miami-Opa Locka Executive).? My friend and fellow Ninety-Niner, Jen Toplak, recommended this airport as a great place to park my little plane for the duration of my week-long stay. ?

While my journey continued south towards the city, the radio chatter and communications of ATC increased.? My route was modified four times while within forty-five minutes of the airport.? The challenge with this was twofold.? One, I wasn?t familiar with the actual waypoints they were giving me. I?d never flown here before! Two, my GPS editing experience was negligible.? Did I exhibit my anxiety over the radio with the crazy cursing conversation being relayed in my head?? Of course not.? Remaining calm was the best thing for me to do, on the plane and on the radio (long, deep, slow breaths Natalie).? It took a number of attempts to get the course modified on my Garmin 430 but with each change, was an improvement.? There was no one to do it for me.? This is typically the best way for me to learn. Fortunately, no one yelled at me for probably taking longer than more experienced pilots on adjusting my course. The approach that was loaded versus the approach that was assigned at the last minute was contradictory as well.? I was about to blow past the ILS into heavier air traffic just as my fingers finally got the correct procedure loaded.? The sun?was setting.? There was an inexplicable peace and satisfaction settling over me as soon as I?d captured the glide slope.? My shoulders relaxed.? The airport lights were on.? I was on final and felt as calm as any master yogi could possibly be, as we were nearing earth again. The corners of my mouth instinctively curled up and the smile grew on my face.? We did it!? My plane and I made it to Miami.? It was a ten hour day.?

While taxiing the Archer to the parking area, I passed a myriad of aircraft ready for the next day?s air show.? The Blue Angels were neatly parked and chocked in a line, perched and prepared. After shutting down the airplane, gulping down two bottles of cold water and munching on some stale popcorn, I was ready to get to the hotel and meet some friends.? Admittedly exhausted, socializing would be minimal tonight.? The hotel was perfect.? We were right in the Miami Beach action and on the beach.??My friends helped me get situated and filled me in on the details of the weekend airshow.? It was dark upon my arrival, but feeling the sand and hearing the crashing waves was a ?must.? There was a beautiful, relaxing pool on the way to the beach and a bar.? ?Drink, please!?? This whole day was like a dream.? So much had taken place. Here I am, walking on Miami Beach, with a cocktail.? This morning, I was having coffee in Cincinnati.? The temperature was perfect. There was a nice ocean breeze. I was content and felt complete satisfaction with the entire day, all that had happened and all that I?d learned.? After sitting by the water, enjoying my drink, it was time to rest.? This girl was tired.? The next day was supposedly going to be spent volunteering beachside at the airshow event.? However, come to find out, we actually had nothing to do on Day One.? Okey dokey.? This is not a terrible place to be, with really no agenda, right?? My beach bag (full of aviation magazines and books) and I spent the day on the beach.? It was amazing.? The airshow performers spent most of the afternoon practicing overhead.? It could not have been a better location to watch!? And of course, there is always that one spot you miss when applying sunscreen.? My tummy was fried and the color of a ripe tomato that night.? If flames had started rising from my stomach, I would not have been surprised.? Thank God this Ohio resident brought the aloe.?

The following day was spent volunteering at the Red Tail Squadron exhibit.? If you aren?t familiar with the Tuskegee Airmen, learn about them!? This was an atypical airshow.? There weren?t any static airplane exhibits because we were literally set up in the sand, next to the ocean.? The other unusual aspect was the general audience in attendance.? Ninety-five percent were in swimsuits.? This is Miami.? These were bathing suits pushing the boundaries of appropriateness.? Actually, there was very little appropriate about any of the swimsuits.? If you could call them that.? They were best described more like strips of some cloth, covering very little amounts skin.? We felt out of place in shorts and shirts!? I?ve got to say, it was some of the best people watching EVER!? I don?t care where you think the best people watching is, this location beats anything you?ve ever seen.? Hands down.? The people I met and had conversations with will not be soon forgotten.? Put this event on your calendar for next year.? I can?t wait to go back.? My son and his girlfriend arrived the following day.? Jack was invited as my ?contracted employee? to take photos and make videos of the show for flyGIRL on the last day of the show.? He?s getting better and better at his photography and videography skills with each event.? We had several days together just for vacationing and spending time together.? It was perfect.? They had their space and I had mine.? We would catch up periodically and reconvene throughout the day.? There was a good balance of ?me? time and together time. ? It was during this time that my son, Jack, was escorted to a random barber by his girlfriend and I.? His hair had gotten so long and he couldn?t seem to find the time or money to get it cut at home.? So, we put Google to use and found a spot nearby.? My hair appointments don?t even take as long as his did that afternoon!? We could?ve made a wig out of the hair surrounding him at the bottom of his chair.? That was one of the single most satisfying activities of the entire trip.? We could see his handsome face again!? We joked that he had to fly to Miami to get a hair cut!!!? We had dinner with some old friends from Cincinnati that evening and planned our next adventure: flying together to The Florida Keys. 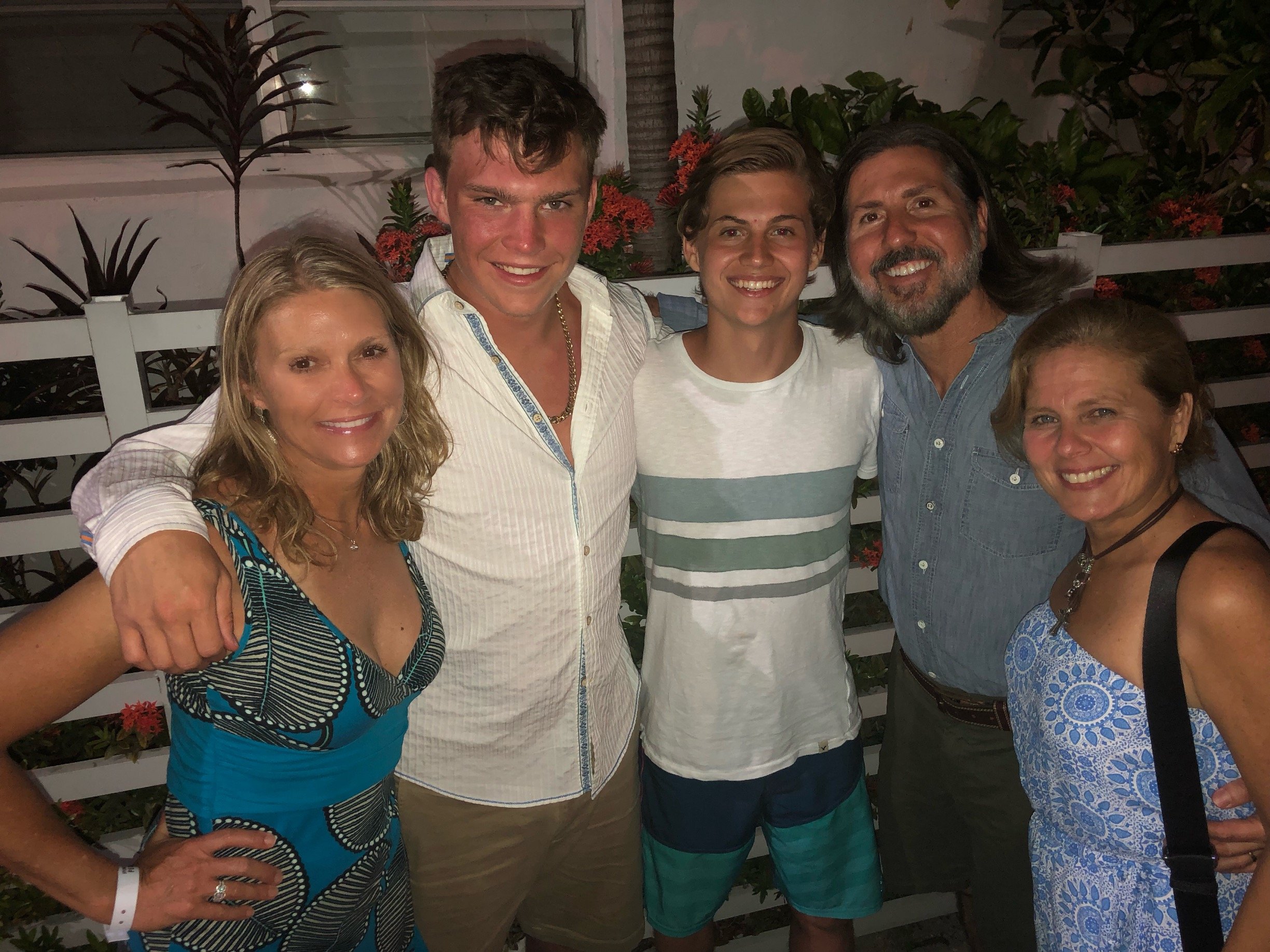 Flying to The Keys has been on my bucket list for some time.? The planning was fairly easy.? We either had to go in the morning or in the evening because of the heat.? In case you weren?t aware, it gets hot down there at the bottom of Florida! It can be miserable in a small plane without air conditioning.? Most small airplanes do not have air conditioning.? It?s expensive and heavy.? You don?t want to add weight if you don?t have to.? Most of the time, you find relief and cool off fairly quickly once you climb to higher altitudes.? However, we wouldn?t be climbing very high on this flight.? We wanted to stay low for the best view near the water and the islands. ? 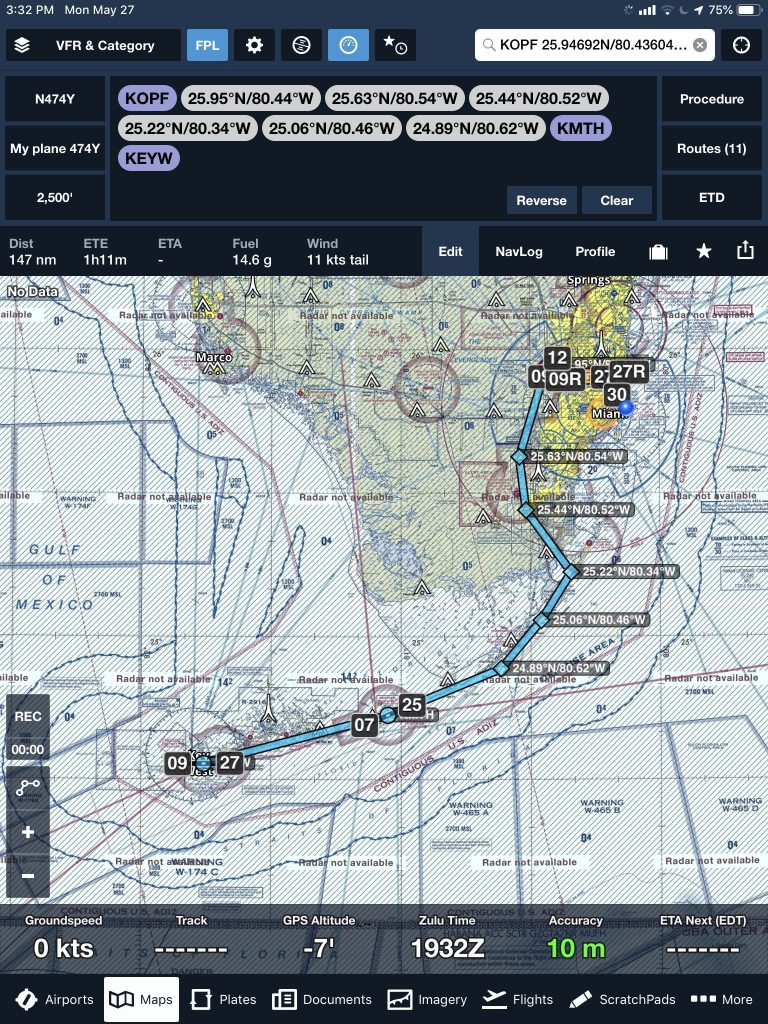 My favorite flying is during sunset.? It?s calm, cooler and the light reflections put on a memorable show.? Sunset over the islands would be gorgeous.? I just knew it!? However, this escapade needed to be timed in a manner in which we wouldn?t be arriving back too late.? Bedtime is coveted.? Crankiness, for me, can often set in after 9:00 pm.? Watch out.? Plus, we?d been on the beach, in the sun, all day.? That can wear anyone out.? This is not a familiar area, especially at night. ? I didn?t want to be flying so low over the ocean or the vast expanse of the Everglades in the dark.? It?s probably not really ever that dark near the city but the point is, it wouldn?t be ideal for me to be flying too late. ? Our timing worked out perfectly.? We arrived at the airport as the Blue Angels were getting ready to take off for their next airshow destination.? They had fans snapping photos through the airport fence as we were preflighting a few steps away.? We felt as if we were in a special club.? We were on THIS side of the fence, getting ready to talk to the same tower and use the same runway these professional performers were using.? The flight was perfect.? It was as picturesque and enchanting as we?d expected.? We flew to the end of the islands and back.? It was a three-hour affair.? We took a ton of pictures!? We were mostly speechless during the return trip because of the spectacular show of varying colors in the sky as the sun was going down.? Magnifique!? As we were arriving back to reality and the bustle of the city, getting ready to land, the lights downtown and of the airport were beginning to glow.? It was such a sight to behold.? After landing, tears filled my eyes.? My life is currently full of busyness, growth, challenges, change and a lot of uncertainty.? I was so grateful for these speechless moments spent with my son and his girlfriend.? It was a gift to be able to share the freedom and beauty of flight together and appreciate the sights from six hundred feet above the world.? It was one of those nights that will never be forgotten. ?

The End Was Near

This had been a productive and fulfilling trip thus far.? Sometimes, when a vacation is winding down, there?s a feeling that you didn?t get to quite accomplish or see and do everything you?d wanted, or that it was ending too soon.? There were none of those feelings.? Plus, it wasn?t over!? There were more adventures to come?.TO BE CONTINUED.