St. Louis view from The Arch!

This weekend had been planned for weeks.? The organization, Wings of Hope, had asked me to come help at one of their STEM programs.? I would have the opportunity to speak to a group of middle-schoolers about my aviation history and what flyGIRL does. ?

St. Louis is a great city and I?ve made some great friends there over the last year.? Getting away is always fun for me!??This is a nice cross-country flight in my little plane.? My son, Wyatt, would be traveling with me because he was on spring break.? I told him he would definitely be the envy of all his friends when he told them that he spent his spring break in St. Louis!!? LOL. He?s used to my sarcasm and often gives me a dose of my own medicine.? He?s a very witty young man.? He decided to invite a friend to hang out with.? I was looking forward to showing him and his friend The Arch as we flew in from the east in my little plane.?

We were departing on Friday and would return Sunday or Monday.? My use of ForeFlight escalated as Friday drew nearer.? It wasn?t looking good.? It would be straight IFR most of the way and the freezing level was at eight thousand feet.? That?s not terrible in itself.? I could fly below that.? However, there was a front pushing through.? The winds were going to get heavier and heavier the closer we got to our destination, KSUS.? Predictions were a direct crosswind at 17 knots, gusting 25.? That?s over my little plane?s limits.? I considered landing at a different airport, using a more favorable runway.? It would?ve been some extra work and the airplane ride was going to be bumpy.? Turbulence forecasted below ten thousand feet.? Grrrrr.

The return trip didn?t look great either.? Checking the prognostic charts, Cincinnati had this beautifully colored purple amoeba covering the entire area on Sunday.? That could change, of course.? It was still three days out.? There?s no guarantee that it would though. The boys really wanted to get back Sunday versus Monday so that they could enjoy their last day of spring break.? The drive would be nearly six hours.? The flight would be close to three. ? 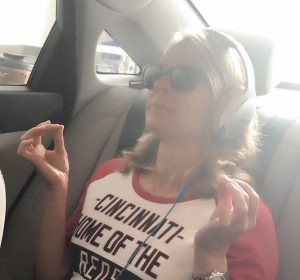 I really wanted to build some actual IFR time but my gut was telling me it may not be the best decision to go ahead with the flight.? My final decision to drive instead of fly came down to the fact that it would be bumpy and it would be IFR almost the entire time.? There would be a new passenger on my plane and I didn?t want to scare him to death.? It would be a pretty high-stress flight.? The boys were disappointed.? In the end, it was the best decision. ?

We loaded our bags into Wyatt?s car and hit the road.? Thankfully, my noise-canceling headphones were nearby and loaded with new batteries because the boys selected the music up front.? Need I say more?? They play football and work out in the gym to rap music every day.? I enjoy a good rap beat like the best of ?em, buuuuttt, there are limits.? As you may also know, for some reason, if rap music is playing, the volume has to be turned up pretty loud too. I?m not exactly sure why, but this goes hand-in-hand. Even with my headphones, the thumping of the bass persisted and filtered through sending a piercing throb in my head occasionally.? They were loving this long road trip though and I didn?t want to ?mom? them. ?

What Is ?Wings of Hope??

The next day the boys entertained themselves easily.? I provided some sightseeing suggestions and they wheeled themselves all over the city!? Much of Saturday was spent in a hangar sharing my knowledge with some very eager kids.? Most of these kids were girls, which made me very excited.? They were attentive and friendly.? Each child seemed to be soaking up the knowledge. ?

This organization started in 1965.? They use airplanes, sometimes donated, to fly people to much needed medical care facilities.? They also fly doctors to communities without health care.? They partner with communities all over the globe, including the United States, India, Africa, South America, and Asia.? They have planes in the air almost every day! You should check out their website to learn more: https://wingsofhope.ngo. There are many volunteer positions, including a need for pilots. ? One of the highlights of this trip was renting scooters.? We were introduced to the ?Bird.?? This is similar to the fairly new way of renting bikes around larger cities but are electric scooters instead.? Woohoo! ?We zipped all around downtown on these speedy little transit vehicles.? It was very fun and I?m sure somewhat annoying for the pedestrians as we zig-zagged around them on the sidewalks.? Sometimes, you have to play a little scavenger hunt game to find available scooters but an app on your phone shows you their location on a real-time map.? This tiny vehicle made it possible for me to keep up with the teenagers and get them everywhere they wanted to go.? We laughed a great deal and covered a lot of ground! By the end of the weekend, I believe we covered all of the major tourist traps.? I mean, tourist destinations. ? What I?d like for you and my teenaged guests to take away from this getaway is:

1) Flying can be awesome with the right conditions.? Weigh all of the pro?s and con?s and err on the conservative side.

2) Road trips with moms are fun.? Chauffeur us around in the?back seat and listen to your own music (headphones are a nice addition. Thank you very much).?

3) Volunteering can lead you to a great organization, new friends, and a lively getaway weekend.

5) Try new things! The scooters were a super fun?addition to the weekend.? Unconventional, but they were much better than Uber or potential blisters.

6) Always throw in laughter.? We all three shared a hotel room. ?There was snoring, a little tasteless bathroom humor, gym deficiencies and lots of snacks!

Take a trip for a good cause.? Traveling is fun whether you fly your own plane or make it a road adventure!