The Florida vacation was coming to an end.? Hopefully, you?ve read Part One and Two.? If not, please go back and read to catch up!? The whole point of my sharing this trip is to provide some encouragement for you to plan flights or flying expeditions that are out of your comfort zone.? When arranging your own excursions, expect apprehension and some anxiety.? That comes most times for me when planning a trip, especially when traveling to a new and unfamiliar location.? Growth happens when you push through the anxiety and nervousness.? You can do anything you want to do!

?Strength and growth come only through continuous effort and struggle.? -Napoleon Hill

One of the highlights of this trip, the flight over The Keys, had been hugely successful and more memorable than I?d imagined.? Before my son and his girlfriend had to head home, we had one more experience together that was arranged by my friend William.? William works for the FAA at Miami International Airport. He invited us to tour the tower at the airport and visit the radar room.? It was like The Hunt for Red October down there in that room.? The environment is completely dark except for these monitors that are constantly sweeping in circles, scanning to keep up with all of the air traffic in their domain.? We were able to get ?behind-the-scenes,? in all kinds of back rooms with batteries, cables, recorders, etc., etc.? Way more technology than my brain can comprehend! ?

The tower was extremely busy.? The airport itself covers more than 3,000 acres.? There are over 1,000 daily flights, serving nearly 170 destinations.? In 2018, more than 45,000,000 passengers traveled through this airport.? It was very cool hearing the radio transmissions and seeing the planes arriving at one of the four runways there.? Watching the planes taxi on the ground from the 320-foot tower felt like witnessing a life-size game of Risk!? There are many airplanes moving around at any given time, all coordinated to perfection for maximum efficiency and safety.? We were able to look through the binoculars, which they actually do use mostly to verify that the landing gear has been extended, particularly on the smaller airplanes.? It was impressive. ? 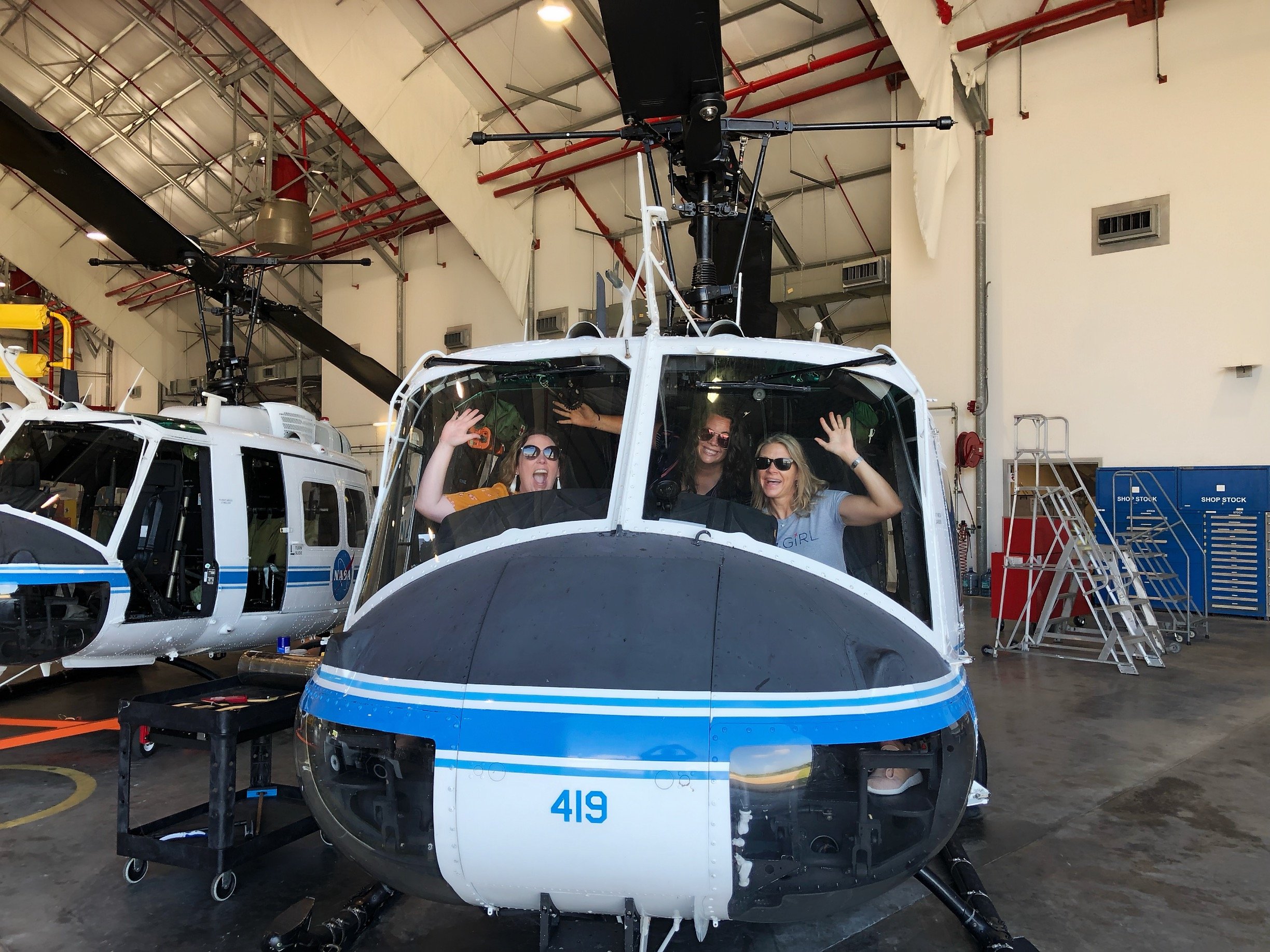 All Good Things Must Come To An End

The next day, my son and his girlfriend hopped on a flight (the Miami Airport terminal car traffic is ridiculous, by the way).? It was time for my journey back home to begin.? I had a short flight on departure day to Titusville, Florida.? My good friends Barbara Kennedy and Jennifer Datz (aka The Kennedy Flygirls) invited me to visit and receive a backstage tour of their work wonderland, NASA and The Kennedy Space Center.? After a good nights sleep at Barbara?s, we had a FULL day ahead.? I met many employees in all kinds of departments that I never even knew existed.? There were numerous launch pads, gift stores, crawler-transporters, helicopters, jets, gift stores, rockets, museums, gift stores, cafeterias, historic buildings, and did I mention, gift stores?? Darn it!? Each store had different items, so of course, there were items in each store that I wanted!? Those darn scientists know how to reel you in, don?t they? They?re just too smart. ? 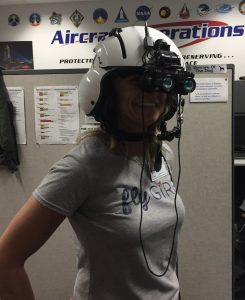 Some of the massive buildings that housed rockets, shuttles or assembly equipment were to such an inconceivable scale, it was difficult to appreciate.? Even standing in front of them, was like looking into a black hole.? There is barely a frame of reference to compare them to.? The amount of concrete, building materials, man-hours, etc. to create such entities is amazing.? This is probably how I looked the whole day during the tour?? OR ? OR ?.? Whoa.? Quoting the great philosopher Forrest Gump, ?that?s all I?m going to say about that.?? On the shuttle runway!

Where Heroes Have Landed

A highlight here was visiting the tower of the Shuttle Landing Facility.? This is a runway designed to accommodate the landing of the space shuttles.? It?s 15,000 feet long.? That?s looooooong. It?s about three miles, to be exact. The whole width is the size of a football field.? For three miles!!!!? That?s a lot of specially formulated concrete.? There is nothing small on The Space Coast.? The Florida alligators apparently enjoy sunbathing on the runway occasionally.? A prime example of a FOD!? We enjoyed a ?full-speed ahead? on the runway in a campus truck with one of the facility officials.? It took a really long time to get from one end to the other.? I kept waiting and waiting and waiting to get to the end.? At one point, it almost seemed we were in a Twilight Zone episode.? Where is the end of this thing??? D?j? Vu every thousand feet.??The runway has markings where each of the shuttle?s wheels met the ground on arrival.? Nice touch.? Astronauts know how to do it right!? There is no detail missed. ? 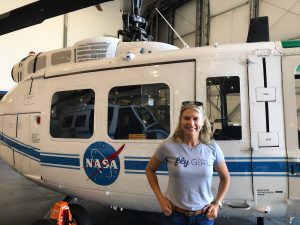 The day was winding down and I had to get back in the air towards Cincinnati.? My airplane was parked at a nearby airport (which I almost had to break out of upon my arrival).? If you visit KTTS, PUSH the gate, not pull.? Just a friendly tip that took me way too long to figure out after repeatedly embarrassing myself.? I was tired, okay?!? My brain function was winding down for the day.? Whatever.? It won?t happen again! Before heading north, I was granted a low pass over the Shuttle Landing Facility runway, which was a short five-minute hop.? My friends were able to film me and my little plane from the tower and record our radio conversations.? So very cool.? Thank you to everyone at The Kennedy Space Center and NASA, especially Barbara and Jen!

Because of my late afternoon start and a physically and mentally exhausting full day with all of the NASA rocket scientists, my expectation to make it all the way back to Ohio was nil.? The weather surrounding Cincinnati was also preventative.? There were thunderstorms everywhere.? My goal was to just get as far north as possible.? My plane and I made it to a small town north of Atlanta.? The timing was perfect.? I landed, Ubered to a nearby hotel and had a superb, relaxing dinner with a glass of wine to cap off the day. ?

The forecast for the following day required me to get going pretty early in the morning.? The summertime heat was going to stir up some more storms that afternoon.? Sleeping in during the summer means giving the storms more time to brew and develop in the heat of the day.? We (my little plane and I) got off without any problems.? The flight was mostly smooth-sailing until just south of home.? There were two huge, ugly areas of convective activity.? ATC helped me maneuver safely in between them.? It was down-pouring and a bit bumpy albeit.? I don?t like bumps.? If this flight had been delayed another thirty minutes, I would not have made it home.? The storms closed in and it rained and stormed for the next two days straight. ?

It was nice to get back home.? Another satisfying jaunt with lots of activity!? This trip couldn?t have been better.? I learned a lot about my airplane, flying and myself by pushing into unfamiliar territory.? I spent some great time with my son (and thankfully persuaded him to get a hair cut).? The beach provided some much-needed sunshine and rest.? There were many memories made with new friends and old friends.? If you?re ever looking for a copilot for some backup support or encouragement, reach out to me.? This girl is always looking for a new adventure and opportunity to learn.? Making a new friend along each journey is a bonus too!!