The Ninety-Nines in Sweetwater - Fly Girl

The Ninety-Nines in Sweetwater

WASP stands for the Women Airforce Service Pilots — this was a group of women who flew in varying capacities during World War II. The Ninety-Nines is an international organization of women pilots originally formed during the early 1900s.

Appropriately, the group was started with ninety-nine original members. Women from that legacy group included the likes of famous aviatrixes such as Amelia Earhart and Louise Thaden.

The Ninety-Nines has expanded to become an international organization comprised of sections and chapters that expand to nearly every corner of the world.

This story was written by Ninety-Nine chapter chair, Andrea McGilvray after members flew to visit the WASP museum in Sweetwater, Texas.

So grab a cup of coffee and enjoy! Maybe one day you’ll find yourself in the same corner of West Texas, and will get to see this incredible location for yourself.

Comment below, have you visited the WASP museum?? Do you plan to one day??

“Nothing is little in Texas. A gaggle of 10 pilots from the San Antonio Chapter Ninety-Nines, in 4 airplanes, found their way from Central Texas to Avenger Field in Sweetwater, Texas on November 13, 2021. Most of us had a tailwind on the way up!

Upon arrival they joined a reunion of family members of a WASP who was also a Ninety-Nine. The variety of airplanes was as varied as their pilots. From a Champ, to a Decathlon, Cessna 172, and a Viking, plus one car. As mentioned, nothing is little in TX, and the wind was far from being a breeze. It was gusting to 22 kts. and yes, the runway that was into the wind was closed for maintenance. The Decathlon was the first to arrive, owned and piloted by Andrea McGilvray, with Jamie Jones as her co-pilot. Since we were the 1st to arrive we had to make sure no one was sleeping at the Museum, so a wingwag was provided by the Decathlon. As soon as we landed and stopped, we tied down the airplane or the wind would have pushed it to the far end of the field.

Andrea McGilvray is the San Antonio [Ninety-Nine] Chapter Chair, an active IAC member, and a member of the EAA Chapter 35. In July she received her A&P certificate and she hopes to have the IFR and Commercial completed by the end of the year. Jamie works in the hospitality industry and is a student pilot who loves to fly.

We were met by WASP Museum President & CEO, Lisa Taylor and Ann Haub. We were then escorted to the WASP Museum where we were greeted by the family of Meriem “Roby” Anderson. Of course, a large distraction was presented to us since the BT-13 was fired up and taxied back to the FBO area.

Soon after, Courtney Hintz, in her Champ, found her way to the FBO. Courtney is a doctor in the U.S. Air Force and is currently stationed at Lackland AFB in San Antonio. We both agreed the crosswind was not fun, but that both airplanes survived the arrival and were safe on the ground and tied up.

Soon after, Cheryl Mora, Patty Taylor, and Lori Hanson arrived in a C-172. Cheryl was our Chapter Chair for a number of years, she is a CFII, ATP, and more. She has flown many different aircraft. Currently, she drives a school bus for Randolph Field ISD and is a part-time flight instructor. Patty is a Commercial/IFR Pilot and works with her husband in the Dental industry. She volunteers lots of her time to help those that cannot afford dental care get it for free at specialty clinics. Lori is a nurse and student pilot. She has always wanted to fly and now if following her long time dream to come true.

The last aircraft to arrive was Dianne Wieman, pilot and owner of her Viking, and Rachel Scarbrough, her co-pilot. Dianne is a CFII, A&P/IA ++, super amazing lady that loves airplanes. Rachel has a very interesting job, she works for none other than Foreflight! What a job to have! She is also a CFI. Lacee Law drove in since she was doing some very exciting training near Dallas and could not be in two places at once, but she did come and spend some time with us all. I won’t spoil the fun, but she is soon to do some serious flying! The sad part was she had to still drive home all the way from Sweetwater that same evening, and it is NOT a 2 hour drive, it was more like 4-5 hours!

So now our gaggle of lady pilots were all together. This was a multipart mission. The 1st part was to spend time with the family of WASP “Roby”, but the other part was to deliver via air, a set of WASP wings, patches, videos, and letters to and from another WASP that this museum did not have any information on. Andrea had gotten to know her a few years ago, and once she discovered the museum did not have information on Rosa Lee Meek, that had to be remedied. But first, we all were hungry and the Museum provided an amazing lunch and also provided ground transportation. 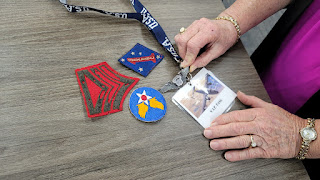 Before the evening dinner, Andrea did a small presentation along with the other Ninety-Nines. From now on, these rare wings and other items will be enjoyed by others. It was an emotional event, but fun was just around the corner. 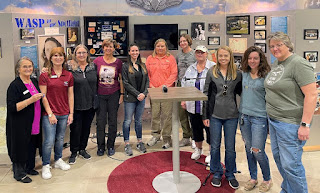 Before the dinner, the BT-13 was to give some rides to the family of the WASP, Roby. The young pilot asked if any of us would be willing to help, and no one had to ask Andrea two times when it came to airplanes. The other ladies had not been to the museum, so Andrea left them to enjoy the tour. Two of the three WASP family members got a ride in the BT-13 and had big smiles when they landed.

A famous question was asked after the rides. A flyover to start the evening was going to happen and a seat was empty. I’m sure you know what the question was. [Does anybody want to go up in the airplane?] Well, we all jumped and said yes, and somehow Andrea got to be the one to go and fly. It pays to organize an event, I guess. The young man’s name is Brian Laing, he and his father do most of the flying for the Museum. There is one lady pilot, but she is usually very busy flying commercially. Andrea was asked to provide an aviation resume, and perhaps one day will be a WASP Museum pilot! 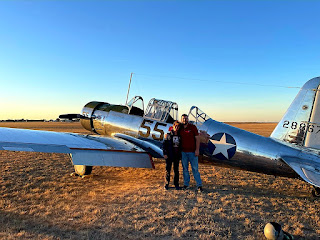 Once airborne, Brian let Andrea take the controls and she was very impressed with how smooth the controls were. She had flown two different T-6 Texans and the controls felt very much the same. The BT-13 was the trainer before the T-6! Well, we flew over the field to start the evening off, then a song was sung and a few other things were said and we had to come back for one more full-pitched propeller noise and window-shaking exit, and then landed. The wind had yet to die down, but Brian made it look super easy. The airplane is heavy and once on the ground is not easily coaxed back off the ground unless you add power. Not so in the Decathlon and the Champ a few hours before. The Viking was already in the hangar, but both Courtney and Andrea put their airplanes in the hangar, while the C-172 had to stay outside for the night.

The evening then started inside with the family and the museum giving the history of Roby. Again, it was quite emotional, but we all were so grateful to be part of such an event. The evening ended with a unique drink, Roby liked her Bourbon. So that ended the evening at the Museum and we all got rides to our hotel. Most of us agreed to get up early in the morning and were hoping for a tailwind home, and for part of the trip there was a little one. It took the Decathlon 15 minutes longer to get home than to get there. Everyone ranted and raved about this flyout. So when will the next one be? Soon, is when we all hope it will be!” 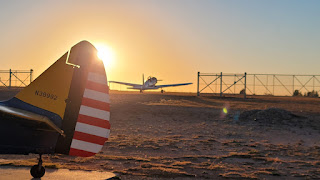